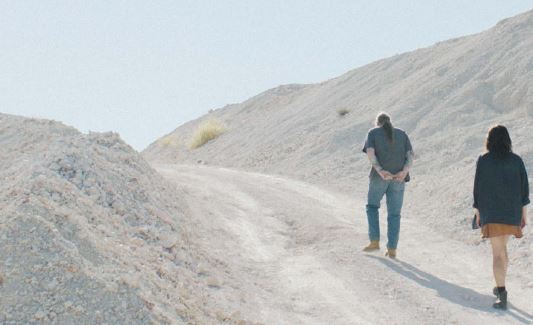 Milena travels to a remote opal mining community to see her estranged, ill father. Lost and alone, she falls into his bewildering world, where men escape society and share ideals of freedom. Soon, he doesn’t want her to leave. Stuck in time, father and daughter try to mend their fractured bond, but their connection is fragile, like the strange, colourful gems he digs up from the earth.

Alena Lodkina is a Russian-born filmmaker based in Melbourne. She has made fiction and documentary short films that have played at festivals around the world, including Melbourne International Film Festival, Message to Man, Antenna Documentary Festival and Belo Horizonte International Short Film Festival. She works as a film editor, recently editing director Amiel Courtin-Wilson’s feature length performance film The Silent Eye (2016). She is a member of the Fountain Vista Collective. Lightning Ridge is her first feature project.

Kate Laurie is a Melbourne-based producer.  In 2013, she took on the dual role of Casting Director and Production Coordinator on the feature film RUIN by Michael Cody and Amiel Courtin-Wilson.  Since then Kate has produced a slew of music videos and short films. Her short films include THERE IS NO SUCH THING AS A JELLYFISH by Alena Lodkina, which screened at MIFF in 2014, and LOOKING TO BUY by Isaac Wall, which featured in the 2015 MIFF program.   In 2015 she re-joined forces with Amiel Courtin-Wilson to form 3:57 Films. She is currently producing his feature THE EMPYREAN alongside US producer John Baker as well as a feature documentary called UNDERWOOD. Kate was Line Producer on Amiel’s 2016 feature film THE SILENT EYE.

Isaac Wall worked as a solicitor the fields of media law and social justice before turning to cinema. In 2014 Isaac established the directors’ collective Fountain Vista with Alena Lodkina, James Vaughan and Sam Dixon. In that year Isaac wrote and directed his debut short LOOKING TO BUY, which premiered at Melbourne International Film Festival 2015 as part of the Accelerator program. In 2015 Isaac produced Alena Lodkina’s PLAIN PLEASURES and joined Alena in co-writing LIGHTNING RIDGE.  Isaac works as a content producer and editor and is currently writing his first feature.